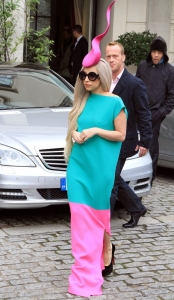 Love her or hate her, you’ve got to admit…it takes some serious guts AND a great bod to sport the outfits Lady Gaga wears.  Not that I necessarily appreciate her fashion sense!  But still, you can’t help but acknowledge that Gaga is a super fit celebrity.

But, with her millions of young fans hanging on her every word and tweet, is Gaga being true to her signature message of self-acceptance?   What does Gaga do to keep herself toned and fit for her intense tour schedule?  What does she eat to keep her figure lean?  Is she a healthy role model for us, for our daughters and granddaughters?  Her recent gluten-free diet controversy seems to indicate otherwise! Looks like maybe Gaga needs a lesson in self-acceptance herself, and a sane approach to fitness!

Gaga’s trainer is Harley Pasternak, who also trains other hot-bodied stars including Katy Perry, Halle Berry, Megan Fox, Eva Mendez, and Rihanna.  Especially during her tours, Pasternak keeps Gaga fit using short 30-minute workouts including circuit strength moves like skater lunges, mountain climbers, walking lunges and jump squats.  For core work, Gaga does a lot of planks, supermans and seated twists. The key, says Pasternak is to train all sides of each muscle group and to keep moving with minimal rest time.  This allows Gaga’s workouts to be short but effective.

Sounds like a pretty healthy and balanced fitness regime, does it not?  Even sounds similar to Athlean-XX for Women!  But don’t quit reading here, Gaga’s new diet choice appears to be anything but balanced! 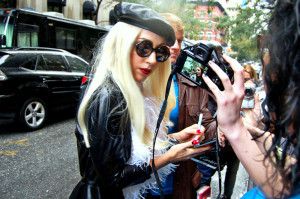 GAGA’S DIET TACTIC TO LOSE 10 LBS IN ONE MONTH!

Just days ago, the Examiner reported that recently Gaga has decided to cut out all carbs from her diet, and has gone completely gluten-free, opting for strict meals of only fish, chicken and vegetables.  Gaga does not have Celiac Disease (Miley Cyrus does, though, and that was her reason for adopting a gluten-free diet).  According to reports, Gaga has decided to follow the gluten-free diet in an attempt to lose 10 pounds in a month.  Sources say she’s limiting herself to just one serving of carbohydrates per week!

Of late, Gaga’s also been sending some messages that go contrary to the whole ‘born this way,’ ‘accept yourself as you are’ image that she portrays to her fans….um, sorry….’monsters.’  A few days ago, Gaga reportedly tweeted, ‘Just killed back to back spin classes.  Eating a salad dreaming of a cheeseburger,’ followed by hastags #PopSingersDontEat and #IwasBornThisWay, sparking controversy in the media, and especially from anti-eating disorders groups. This follows Lady Gaga’s recent admission to having struggled with bulimia in her teen years, and her plea to girls to ‘stop the dieting.’  But it appears that Gaga may still be struggling with her own body issues.  It would appear she’s dieting, over-exercising and worse, promoting these behaviors to her millions of young fans in her tweets!

If Gaga’s working out as hard as it sounds like she is, her no-carb diet is not going to help her power through her workouts.  She’s going to feel mighty hungry, and probably tired as well…which will not help her energy levels for her tour!

Eating no carbs can backfire in another way too – not eating carbs will not leave you feeling satiated, and ultimately you may feel so hungry that it can lead to binging.  In the end when Gaga finds that the no carb diet doesn’t work, she might end up actually gaining weight!

It’s important to note that there’s nothing wrong with the gluten free diet in and of itself – but it’s probably not necessary to go gluten free unless you have a gluten intolerance.  Gaga would be better off eating a balanced diet of veggies, fruits and lean proteins and including slow-burning whole grain carbs like whole wheat, quinoa and brown rice along with other tasty fiber-filled carb sources like sweet potatoes and squash. 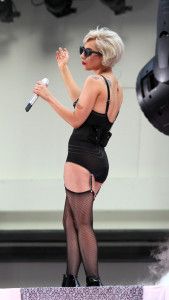 Lady Gaga’s 2 hour spin workouts and her drastic diet are a set-up for failure.  These strategies aren’t practical and they’re not sustainable.  The key to long-term results is CONSISTENCY.  It’s just not possible to be consistent with unrealistic expectations of yourself, like 2 hours at the gym and cutting out entire food groups!

Why do you think Gaga feels she needs to lose 10 lbs in a month anyway?  Probably because she gained  10 lbs last month!  Does this yo-yo weight loss and gain sound familiar to you?  What about the drastic measures to fix the damage done?  Are you fed up with this never ending cycle?  There is a SOLUTION!

We’re all about being REAL at Athlean-XX for Women.  Realistic nutrition and exercise for real women!  Being realistic is only way to change your lifestyle, change your body AND maintain those healthy changes!  Yes, we know and accept women love carbs, and they’re not out of the question on the Athlean-XX for Women nutrition plan.   It’s all about choosing the RIGHT carbs!

Contrary to most women’s diet plans, Athlean-XX for Women encourages you to eat more!  The idea is to eat 5 – 6 times a day, healthy balanced meals including veggies, fruits, slow-burning carbs and lean proteins.  We don’t want you to feel hungry – we want you to have the energy you need to get through our short but challenging 30-minute workouts.  You’ll be amazed by how EASY it is to be consistent with 30 minute workouts and a non-restrictive diet, and how incredibly EFFECTIVE they can be!  We’d love to have you join us on Team Athlean and become our next SuXXess Story!