Are You An Active Couch Potato? How a Sedentary Job Affects Your Body 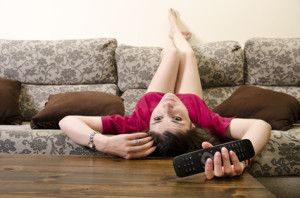 First of all…sounds like an oxymoron doesn’t it?  According to Gretchen Reynolds in her book “The First 20 Minutes: Surprising Science Reveals How We Can: Exercise Better, Train Smarter, Live Longer,”  an active couch potato is a person who sits a lot because of job and lifestyle, and then gets active just for an hour or so per day before or after work.  My guess is that this may describe many of us – particularly if we work in front of a computer most of the time, drive for hours per day and come home to relax in front of the tube, computer or with a book in the evenings.

The percentage of Americans that lead this type of lifestyle has increased over the past several decades, first with the advent of machines replacing physical labor in industry, and later with computers becoming part of the everyday life of most workers.  A recent survey found that 80% of jobs in America are almost completely sedentary!  To top it off, recent studies show that the average American spends 5 hours or more daily in front of the TV.  We’re learning that habit early – toddlers often watch 4 – 6 hours per day.  According to the US Census of 2009, the average American’s commute is about 60 minutes per day with a full 20% of us commuting more than one hour per day.  Put it all together and that’s a lot of time spent sitting.

As for those of us who make the effort and time to head to the gym for 30 minutes to an hour most days of the week, our exercise counteracts the negative effects of our otherwise sedentary lifestyle…right?  New evidence is showing it may not be enough! 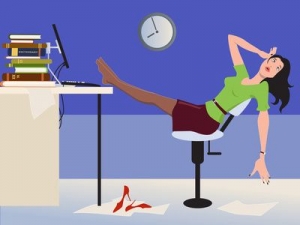 TOO MUCH SITTING MAKES YOU DIE EARLY

According to a 1982 study cited in “The First 20 Minutes”  a large group of affluent men were evaluated for the amount of time that they spent watching TV or driving, as well as their exercise habits.   The study showed that the men who spent 23 hours or more per week watching TV or sitting in cars had a 64% greater chance of dying of heart disease than those who sat for 11 hours per week or less.  What was unexpected is that many of the men who sat long hours and developed heart disease, also exercised!  It seems that their workouts didn’t counteract the damage done by long hours sitting.

A more recent study followed 250,000 American adults aged 50 to 71 and their television-watching and exercise habits.  It was found that people who exercised for 7 hours a week and watched 5 hours of television a day where more likely to die prematurely than those who worked out the same amount of hours per week and watched less than an hour of TV per day.

Another interesting statistic was generated by a new Australian study – every hour of television that a person watches after the age of 25 potentially decreases their lifespan by 22 minutes!

SITTING A LOT DESTROYS YOUR METABOLISM

Several studies cited in “The First 20 Minutes” also showed that sitting a lot negatively affects your metabolism by messing with your insulin resistance.  When your muscles don’t get the chance to move for many hours at a time, they are less able to take up glucose from the bloodstream.  Levels of blood sugar after meals also rise dramatically, by as much as 90 percent. Insulin response also slows. Once again, scientists found that occasional bouts of exercise don’t completely return these disrupted blood sugar symptoms back to normal.  It also seemed that levels of lipoprotein lipase (an enzyme that aids the breakdown of fat in the bloodstream) is regulated by how much you sit.  Without sufficient levels of this enzyme, fat accumulates in the blood and can cause cardiovascular disease over time. 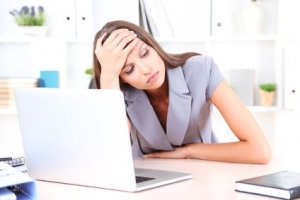 HOW TO COUNTERACT THE DAMAGE DONE BY A SEDENTARY JOB OR LIFESTYLE?

If your job is fairly sedentary, this may not be so easy to change, but you can incorporate movement more often.  Instead of 15 minute breaks, try taking 5 minute breaks every hour to move.  Jump rope for a minute, do jumping jacks, jog in place, walk the office briskly, or if you can, step outside for a fast walk around the block.  Even standing up more frequently and moving around (get up to talk to a co-worker instead of emailing him or her) is enough to improve health significantly. A study by the American College of Sports Medicine found that these types of frequent activity breaks keep insulin levels stable.  Interestingly the study found that jogging didn’t improve blood sugar regulation any more than walking did – the important thing was incorporating some kind of movement to break up the interminable hours of sitting.

Make Movement Part of Your Routine

Fidget much?  If not, you might want to start.  In a study of obese vs. thin women, the thinner women tended to be natural fidgeters – they burned an additional three hundred calories every day.

Can you incorporate standing into any part of your daily routine?  If you talk on the phone regularly as part of your job, use the calls as an excuse to stand.  Read much for your work?  Can you prop papers or books on a music stand so that you can stand up while you read them?

Whatever your lifestyle, find ways to naturally incorporate movement throughout the day.  At Athlean-XX for Women, our workouts are only 30 minutes per day, but we’re so passionate about regular movement that we post Workout Commands (one to two minute activity challenges) twice per day on our Facebook page. As part of the Athlean-XX for Women exercise program, we’ve also included a bonus Quickies DVD, which contains several 5 – 10 minute workouts.  These are also perfect to use to incorporate short bouts of activity throughout the day (if you work from home) or take some cards from the Athlean-XX Card Body Challenge to work with you and choose an exercise every hour or two to get you moving in your workstation.  Our goal at Athlean-XX  for Women is to support you in your healthy, active lifestyle no matter where you are!

Choose My Program
Are You An Active Couch Potato? How a Sedentary Job Affects Your Body
athleanx,FitnessBlog,ForWomen,WorkoutTips
E-Commerce powered by UltraCart