You may have read my post last week about sugar, its addictive qualities, and its effects on metabolism, entitled, “Spike, Crash and Burn: How Even a Little Sugar Could Be Sabotaging Your Weight Loss and Workouts”.  Blood sugar and its effect on metabolism is an extremely important piece of the weight loss and fitness puzzle.  As I explained, the spikes and crashes that sugar creates in our bodies can cause our metabolism to go into survival mode.  These energy ups and downs send signals to our body that we don’t have a consistent source of energy to keep us moving.  The body interprets this is a need to conserve energy, so it begins storing fat instead of burning it.  In this survival mode, we may find ourselves working out regularly and not losing weight at all.

You may be thinking, “No problem, I’ll just replace sugar with artificial sweeteners!”  But, do these products have consequences for our health?  What about our weight loss goals?

Are you confusing your body?

There is some research that shows that using artificial sweeteners instead of sugar may actually ‘trick’ our bodies into thinking we’re eating sugar, and cause similar physiological effects!  Your body has its own automatic responses to signals from the brain as you take in the very first taste of a food.  According to Dr. Mark Hyman on his blog, just a taste of something sweet, even if it isn’t real sugar, signals to your body that calories are on the way and triggers a set of metabolic responses to prepare the body for these incoming calories.

A 2008 study in the Journal of Behavioral Neuroscience showed that these physiological cues can actually make you gain weight, just as if you were eating real sugar. In a study comparing two groups of mice, one group was given yogurt sweetened with sugar and the other group received saccharin-sweetened yogurt. The mice receiving the saccharin had significant increases in appetite, ate more, gained more weight and experienced a slowing in their metabolism!  The saccharin acted on the mice’s bodies in an unexpected way – rather than causing them to take in less calories over time, it caused them to eat more and gain weight.

Other studies have shown an increase in weight gain in human beings who drank Diet Coke, which is sweetened with another common artificial sweetener, aspartame.  According to two studies conducted by the School of Medicine at the University of Texas Health Science Center San Antonio, people who drank two Diet Cokes per day experienced 500% greater increases in waist circumference than those of non-drinkers!

According to interpretations of these studies, it seems that when the body experiences the sweet taste, it receives the cue that calories and a dose of sugar will be coming.  When we eat the artificial sweetener and our body doesn’t receive the calories and sugar we ‘promised’ it, the body reacts by making us hungrier – it’s attempting to get the calories it expected to get in the first place.  The sweet taste of artificial sweeteners may also stimulate an endocrinological response, such as insulin production from your pancreas, which can cause a spike and crash effect similar to sugar. 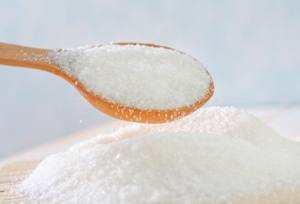 Other health side effects

You may have heard about the studies over the past few decades that have linked aspartame to cancer.  It’s had the most complaints of any food additive available to the public and has possible side effects like headaches, migraines, panic attacks, dizziness, irritability, nausea, intestinal discomfort, skin rash, and nervousness. Aspartame is also on an EPA list of potentially dangerous chemicals for causing problems with neurotoxicity (it can result in an accumulation of formaldehyde in the brain), as well as being linked to problems with anxiety, depression and bipolar disorder.  Aspartame is still the most commonly used sweetener in diet colas, including Diet Coke.  If you still need that extra motivation to kick a Diet Coke habit, check out this article by Well + Good NYC for a few more reasons to avoid Diet Coke.

While saccharin isn’t the most popular sweetener anymore, it can still be found in some sugar free gums and as a food additive.  It got a lot of bad press for being linked to cancer a few decades ago, but most of the carcinogen warnings were removed from products because food industry testing ultimately concluded that it only caused bladder cancer in rodents and that these results didn’t translate to humans. However, further research needs to be conducted to determine the effect of saccharin on human cells.  Saccharin is also a strong allergen for some people causing headache, difficulty breathing, the sudden appearance of a skin rash or hives and diarrhea. See a doctor immediately if you experience any of these side effects.

Sucralose is a synthetic compound derived from sugar and chlorine molecules.  While the Splenda company goes to great lengths to assure consumers of the safety of the product, some studies and anecdotal evidence have linked it to headaches and migraines, as well as digestive problems. GI problems include gas, bloating, stomach cramping, diarrhea and constipation.

Sorbitol is a polyalcohol sugar which is used in many sugar-free gums. This more natural sugar substitute doesn’t cause an insulin reaction, has half the calories of sugar and is actually not digested by the small intestine.  However, it is a natural laxative and can cause diarrhea, irritable bowel syndrome, bloating and flatulence, especially in high-doses.

If you have to use a non-sugar sweetener, stevia may be the safest alternative.  Stevia is a sweet herb from South America that has been used for 400 years without ill effect.  It’s 200 – 300 times sweeter than sugar, so you only need a tiny bit to sweeten your tea or coffee. However, it’s possible that even this very natural sweetener, much like it’s artificial counterparts, has effects on our hunger levels, causing us to crave more sweets.

Overall, the occasional artificially-sweetened treat may not be a problem, but if you’re consuming Diet Coke or other sources of artificial sweetener on a daily basis, you may want to think about cutting back.  Over time these sweeteners can create some serious health problems, and they may also lead you to be hungrier, crave more sweets and eat more.

Did you know that eating more regularly throughout the day can help to cut back on sweets cravings, improve your metabolism and increase your body’s ability to burn fat?  Eating 6x per day is a key premise of the Athlean-XX for Women Nutrition plan.  The plan is super flexible – you can follow our set meal plan for 90 days OR choose and combine foods from our food lists to create your own meals.  Designed to fit into a woman’s busy schedule, this plan is also easy – there’s nothing to measure or track.  There is also no separate cooking and eating – the whole family can eat the same foods you do!  Once you try eating this way, you’ll find that fueling your body throughout the day will give you much more energy to live your busy life and feel great during your workouts!  Did I mention that the Athlean-XX for Women workouts are only 30 minutes a day?  To give your metabolism and weight loss the boost you need now, give the Athlean-XX for Women Nutrition and Training Program a try.