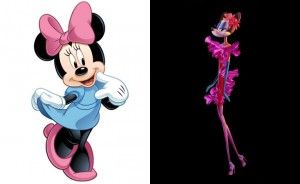 New here?  Like Athlean-XX for Women on Facebook to stay up to date with new posts, great fitness and nutrition articles, motivations and inspirations, fitness challenges, Q&As, giveaways and more!

A new Barney’s New York holiday ad campaign has begun to spark serious criticism from the media and girls’ body image advocates – and it’s not difficult to see why.  Barney’s new ad campaign plans to feature versions of Minnie Mouse, Daisy Duck and other children’s Disney characters as tall, stick-thin runway models.  Many media sources and critics describe the skinny versions of the characters as appearing anorexic, unhealthy or sickly.  They are concerned that young girls who view the holiday window display will get the wrong idea when seeing their favorite Disney characters fantasizing about being ultra thin runway models.

The ad campaign, called Electric Holiday is scheduled to open on November 14th in the window display of Barney’s New York’s Madison Avenue flagship store.  It will feature a 3D movie dream sequence in which Minnie Mouse imagines that she and her friends (including Goofy, Mickey Mouse, Daisy Duck, Princess Tiana, Snow White and Cruella DeVille) are supermodels heading to Paris to participate in a high fashion runway show. Reportedly Barney’s New York and Disney executives worked closely together on the details of the project.  States Dennis Freedman, Barney’s creative director, “When we got to the moment when all Disney characters walk on the runway, there was a discussion. The standard Minnie Mouse will not look so good in a Lanvin dress. There was a real moment of silence, because these characters don’t change. I said, ‘If we’re going to make this work, we have to have a 5-foot-11 Minnie,’ and they agreed.”  Drawings of the ‘runway model’ Disney characters were made by John Quinn, Disney’s character art director.  Minnie Mouse will be wearing a Lanvin gown, Daisy Duck will don Dolce & Gabbana and Mickey Mouse will model Balenciaga. 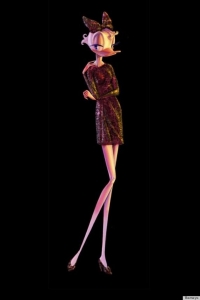 Critics state that while there’s nothing wrong with tall, thin women, it’s not right to change classic children’s cartoon characters’ bodies into 5′ 11″ size 0 toothpicks just so that they’ll ‘look good’ in a designer dress.  A petition to encourage Barney’s to ‘leave Minnie alone’ was created on Change.org.  Some celebrities have begun to speak out about the campaign including Virginia Madsen and Disney heiress Abigail Disney, both of whom shared the Change.org petition link on Twitter.

The campaign on Change.org invites people to sign the petition, but also highlights some staggering statistics:

The last two statistics in particular, as well as the increase in eating disorder hospitalizations for children under 12 illustrate that little girls are thinking about their ‘figures’ at a much earlier age than we may have thought. 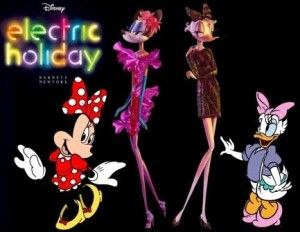 Recently Disney and Barney’s executives released a statement in response to the backlash over the ad campaign. “We are saddened that activists have repeatedly tried to distort a light hearted holiday promotion in order to draw media attention to themselves. They have deliberately ignored previously released information which clearly states this one-time promotion focuses on a  three minute ‘moving art’ video. The only place these interpretive versions of the Disney characters make an appearance is in the 3-minute moving art video and only briefly in a 7-second sequence. At the end of the video, Minnie appears in her regular classic form wearing the same designer Lanvin dress that was in the dream sequence.”

What are your thoughts about the Skinny Minnie scandal?  Are critics overreacting to Barney’s holiday ad campaign?  Or, should we all be more concerned about what messages the media and fashion industry send to teens and little girls?  If Minnie can wear the designer Lanvin dress ‘in her regular classic form’ at the end of the animated video, does she really need to be transformed into a Skinny Minnie for her 7 second stint in Paris?

At Athlean-XX for Women, we believe it’s important that women, starting with young women, focus on health and strength in both body and mind, rather than on clothing size, ‘skinniness’ or weight.  Nutritious food and fitness should fit naturally into our lives, and flexibility is the key to a long lasting healthy lifestyle. We built our Athlean-XX for Women fitness and nutrition program around the concept of flexibility. Our Nutrition Plan does include a set 90 day meal plan for those who want it, but you also have the alternative of eating based on a set of flexible guidelines instead.  We recommend women eat small well-rounded meals 5 – 6 times per day to stay full and energized, help boost metabolism and get adequate nutrition for exercise. Our Athlean-XX for Women Fitness Plan is flexible too – these challenging but effective 30 minute workouts can be done at home with our DVDs or at the gym with our Girl on the Go Workout Cards.  If you’re looking for a healthy lifelong nutrition and fitness solution, we encourage you to give Athlean-XX for Women a try!