ARE DUMBBELLS ALL THAT’S NEEDED TO BUILD BIG BICEPS? 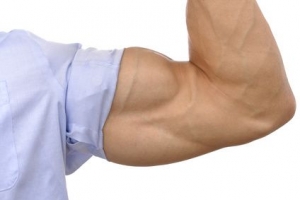 One of the most sought after “show” muscles that a guy can get is a noticeable set of biceps.   You know…the kind that you can’t hide regardless of whether you’re wearing short or long sleeves.  Plain and simple, guys want to build big biceps and they usually wind up trying all sorts of crazy routines in their efforts to do so.  The only problem?

One Surprising Piece of Equipment to Get Bigger Biceps

If you’re doing all your work with JUST DUMBBELLS and BARS, then I’m going to tell you….you’re missing out on ever meeting your true growth potential. Here’s the funny part.  The one piece of equipment that you’re NOT USING that is costing you in your pursuit of bigger biceps is the one that you’re probably least inclined to use because you think it’s for wimps or “just something that women train with”…and that is tubing!

I know what you’re thinking, “How the heck is tubing going to help me to get bigger biceps?!?”, “Aren’t I supposed to be lifting HEAVY in order to build bigger muscles?!?”.  These are valid points, but you’re missing one key element in the whole picture by thinking this way.  You’re totally overlooking the concept of STRENGTH CURVES. Strength curves are the natural built-in ebb and flow of difficulty that your muscles feel when you’re doing an exercise.  In the case of biceps, it can vary greatly depending upon the type of training tool you’re working out with.

How Do Strength Curves Work?

Let’s take a look at the basic bicep curl exercise using a barbell.  It’s obviously pretty easy at the start of the exercise to get the bar moving, but as you get it up to the midpoint of the exercise (the point where the bar is parallel to the ground) then you know it’s almost impossible to hold this position especially if you have any amount of serious weight on the bar.  Finally, as you move up to the top, the resistance gets less and less, to the point where you could probably hold the bar all the way at the top for minutes let alone seconds.

Now compare that to the VERY SAME exercise using tubing.  Starts off easy again….then gets harder and harder and harder the further up you go.  Get to the very top of the curl and the tension is greatest.  This occurs right near peak contraction of the biceps!  Hmmm…see why so many guys have trouble building these elusive “peaks” that they’re after??

Start using tubing curls in your routine and you’ll finally be hitting the muscle fibers that you’ve been stubbornly ignoring by being committed to just an old fashioned “iron addiction”!  Now don’t get me wrong, the tubing should be thick.  Choose a thickness that makes it difficult for you to get much more than 12 reps or so.

I know.  Some habits are hard to break.  But if you’re looking to get biceps that stand up and make others take notice….then start doing ALL of the exercises that you need to do to maximize the return on your time spent sweating away to get them. For more great ways on how you can build bigger biceps and mountainous peaks then head to youtube right now and check out my video showing you how to do this with just one simple move!