TOO FAT FOR DISNEY WORLD?!? 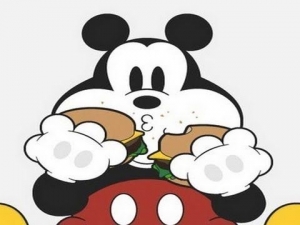 I was driving into work this morning and was listening to the radio.  In between beats from Usher, Nickelback, and Michael Jackson (gotta love satellite radio and YES…my musical taste is as varied as my workouts!) a “breaking news” story came in about a recent tourist to Disney World being up in arms about not being let on the rides because of their size and weight!

I have to admit, my first reaction was…..”well, don’t they realize that they are actually a threat to the safety of others on the ride if their weight is throwing off the proper mechanics of the roller coaster”?!?  And while this may in fact be true, it was the second thought that followed that really got me to thinking.  Is it me or is Disney World being a bit hypocritical??

Every year I make a trip down to Universal Studios to see the Halloween Horror Nights (which if you haven’t gone, and you like scary movies and haunted houses then it’s a MUST!) and I have to say…it certainly ain’t easy to eat well down there.  Unless of course you don’t mind gnawing on turkey legs that resemble something my dogs would be fighting over and not a human!  If you don’t like that there are plenty of places to get chili dogs, cotton candy, giant burgers and soda!  What if you’d like to stay somewhat “athlean”…lol….any options for us?? Sure, maybe just maybe at the hotel you’re staying at or at Downtown Disney (which isn’t anywhere near the parks, so downtown is really like 20 minutes away!).

So back to the story.  Who’s fault is it?  The guy who wasn’t let on the ride because his belly was too big to have the safety belt fit securely around his waist or the park for ultimately “creating” this type of customer with it’s terribly non nutritious foods it’s serving up by the truckloads?  Not so clear cut now is it? As you guys know here…I’m a big believer in taking action and, more importantly, being responsible for our actions.  Nobody can MAKE you workout.  Nobody can MAKE you eat well.  This has to come from within.  There has to be a desire to want to improve and take yourself to levels of achievement that in the beginning might seem a bit daunting.  But at the same time, nobody can take away the feeling of success you get when you reach that goal! Dangling gristled turkey legs in front of people who are often bigger than the characters in costume just doesn’t seem right.  Both are responsible of course, but it just all seems wrong to me! Then again, Six Pack Great Adventure and Deltoid World just don’t seem so marketable so who am I to argue?  What do you guys think?

Choose My Program
TOO FAT FOR DISNEY WORLD?!?
athleanx,Uncategorized
E-Commerce powered by UltraCart